In June of 2018 I found myself in South Dakota to support my sister who was running her second half marathon on the Michelson Trail. At this time I was also battling moderate to severe depression. I was in a complete mental funk and just could not snap out of it. To me meds were not going to be the first form of treatment. Flash forward a few days and there I am signing up for Running Start on Facebook. My first thought was “what could it hurt?” A few weeks later I received a phone call asking if I was still interested in the program because I somehow missed the email telling me I was accepted. I missed our first meeting but was met by my personal motivator and shared with her the reasons I chose to try this out. You see, for years I made every excuse to not take a chance and try something new. My stress, anxiety, and depression had kept me paralyzed in that mindset. Multiple health problems had me wondering if I could do this and Serena just talked me through it. My sister had also mentioned how running really helped her with her stress, so I decided right then that I would take this opportunity and give it my best shot. 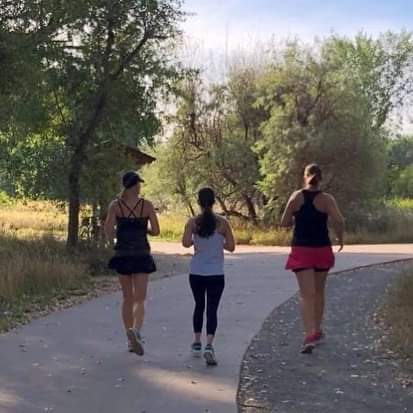 Flash forward 12 weeks and there, with my second personal motivator Becky (Serena moved out of state for a job opportunity) and I remember the week that I had just faced. Everything had just started to crumble in life and there I was standing on the starting line thinking to myself. This is my chance to overtake the “old” me. I was able to get through my tough week and still get to that starting line. I was dealing with so many emotions and was still able to get through it without the paralyzing moments. Through this 12 week training I had come out of my shell. I started to get out more, I was getting more work done, I was seeing improvement in my mood and energy and by the time race day arrived I was ready to face this new season of my life. They say it is half the battle to get to the starting line. Well when I got there I was ready to be at the finish line. It was such a relief to know that I had an amazing group of women supporting me and two amazing woman to motivate me every step of the way. Crossing that finish line was a feeling like none other I had set out on a journey to run a 5k and here I was a 5k finisher. It has now motivated my youngest son to want to start running as well. I cannot begin to describe the amount of change that Running Start brought to my life. I can say that it has all been positive and drastically life changing. Just finally being able to be mentally present in my life again will keep me a runner for life!